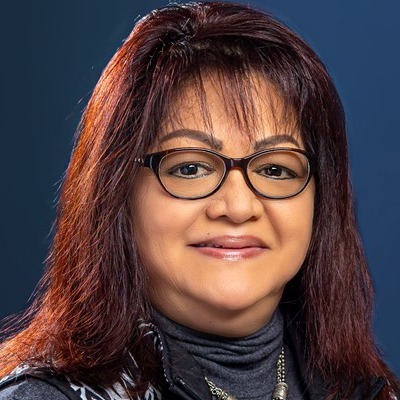 Phyllis Gogue married Ray, her high school sweetheart, 34 years ago. They have two kids and four of THE most adorable grandkids. Phyllis & Ray love to hunt and they process their own deer to include making venison jerky. She grew up as a military brat and married into the military so she has traveled to many countries and to too many islands. Ocean water is not her thing. Phyllis practically grew up in a bowling alley and she raised her kids the same way. At one time her family had 15 bowling balls. There were only four people in the family. Phyllis claims she doesn’t bowl anymore because her nails have a tendency to break. Oh, the vanity of this career.

If you’ve been around Phyllis long enough, you will know she is a foodie. So cooking and dining out are hobbies and experiences she treasures in life. She’s also Catholic but only includes that in her bio because as a foodie, a good glass of wine is always a bonus.

Now for the serious stuff, Phyllis Gogue has been the Vice President of Economic Development for the Greater Killeen Chamber of Commerce since 2001. Gogue has been with the Chamber since December 1996, and during her tenure she has held numerous positions ranging from director of membership to director of marketing. Previously, Gogue worked for the Harker Heights Chamber of Commerce from March 1995 to December 1996 as their first full-time employee serving as Office Manager.

As VP of Economic Development, Gogue has served as part of the Killeen team who recruited or assisted in relocation efforts of the following companies: Aegis Communications, Blackboard Student Services, Convergys, Stewart & Stevenson, Z-Systems, Raytheon and numerous retailers.

Gogue has also served on the Texas Economic Development Council’s (TEDC) state’s board of directors as well as chairman for several committees. Gogue also served as co-chair of the Associate Advisory Committee with the Industrial Asset Management Council.

If you could travel anywhere, where would it be?  Rome

If you could be on any tv game show, what would it be?  Deal or No Deal. I like to gamble.

Have you ever met anyone famous?  Yes, Brigadier General Paul Tibbets. He was the pilot of the Enola Gay, which dropped the atomic bomb in Japan.

What is your karaoke song?  Knock 3 Times

If you had one superpower what would it be?  Positive Power (where I could sprinkle Happiness on anyone who needs it)